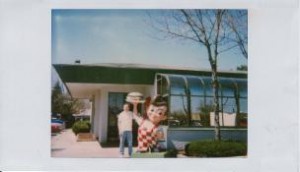 I’ve had this sudden obsession with analog film.  It started when we saw the movie Super 8, which made me google super 8mm film, and then start pricing the stuff.  It’s insanely expensive – something like $20 a roll, which is roughly $10 a minute.  The cameras are cheap, practically free on eBay, with some going for twenty bucks.  But you also have to buy a projector to see the stuff.  And you have to get it developed, which involves mailing it away to Kansas or something, waiting ten to 20 days to find out you filmed 90 seconds of darkness or cat hair flapping against the gate.  And editing it involves a knife, tape, and far more patience than I could ever muster.

That had me thinking about Polaroid, though.  We had one when I was a kid.  I was the 135 child, that old format camera, and all of my baby pictures were on slide film.  Monica was the 110 kid, the next low-end Kodak format.  But by Angie, it was Polaroid, instant pictures.  This all seems lame now that any expectant mother’s got ten video cameras and a quartet of iPhones trained on her junk from first contraction to ejection of placenta, but back then, a Polaroid was as instant as you got.  My memories of 1976, her birth, are forever stained in the rusty sepia tones of a deteriorated  Type 600 integrated film image.

During my trip across the country in 1999, I became infatuated with Polaroids again.  I’d heard they now had a disposable camera, and I became hung up on finding one.  This was right before digital photography became cheap, and I took pictures on the long trip with a 35mm film camera, a cheap point-shoot I got in 1993.  But I stopped in every mall on my crawl across America, looking for one of those damn things.  They must have just discontinued them, and I finally gave up and bought a standard Polaroid camera and a couple of packs of film, only to find the disposable at the next Target at which I stopped.

The Polaroid was interesting, but I got bored of it fast.  I liked the oddball size of the portable version, but in some ways, the Polaroid was the worst of both film and digital.  It was insanely expensive per shot, very hard to work with anything but the most perfect light conditions, and almost any picture taken had a certain flat, lifeless quality to them.  There’s also something about the plastic Fisher-Price cased cameras that scream “I’m an idiot” when you’re walking around snapping pictures.  (I’m sure now it screams “I’m a hipster!” – same difference.)  The camera went in a closet when I arrived in New York, after I burned through the last few frames of film, and I don’t know what happened after that.  Either I gave away, eBayed, or threw out the camera years later.

Polaroid suddenly went out of business, or stopped making the film, and the 10-shot packs of expired 600 film started selling for $60 online.  Some group tried reverse-engineering the formula to restart production, and they did, with so-so results.  I was in a hotel in New York last year and this woman was taking pictures of her kids with a Polaroid.  I asked her if it was old film or the new stuff, and she said it was new, and that it seemed to work fine.  I heard mixed results online, that some batches were streaked or splotchy, but the snapshots she was holding looked decent.  Not $21.99 for 8 shots decent, but I don’t have kids, so how do I know.

What I don’t understand is that some other instant film still existed.  I think Fuji made their own instant film, and I think still does.  Is that a different format or cartridge?  Also, I think they make large Polaroid film, like 5×7 stuff for pro cameras.  I could google this, but I’m sure I would get a wikipedia page that contained nothing but chemical formulas and no actual information.

What’s interesting is Polaroid now makes a printer that works on instant film.  You bluetooth to this little thing about the size of a pack of cigs, and zap a digital photo, and it spits out an instant print of it.  I think the prints are only about 2×3, probably not cheap, and it doesn’t work on an iPhone.  (It does use USB though.)  Now I’m interested in checking one of these out.  I have no idea what I would do with it – probably take a dozen pictures of my cats, then throw it in the closet.  But I get infatuated by technology like this, and I’m not sure why.  It’s the same reason I’ll waste days googling Commodore 64 stuff, even though I know my phone is a thousand times faster and easier to use.  That doesn’t stop me from reading an endless stream of articles about people writing ethernet into their 8-bit, 30-year-old computers with less memory than my watch.

Yes, a cartridge is either 90 or 180 seconds depending on quality settings or camera type or something. I don't know if it was always that expensive or if it's a function of almost nobody using the stuff and there's one factory that makes like nine rolls a year.