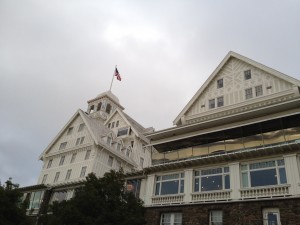 I’m trying to force myself to write daily, not just the fiction writing, but some kind of post here, to keep the momentum going, but also to get out of my system this sketching, the rote description of the past and the present, which isn’t the kind of writing I do for stories and books, or at least it won’t be anymore.

That thing to the right, by the way, is the Claremont resort, where we went for Thanksgiving.  The inside reminds me of the hotel in The Shining, although it’s been so long since I’ve seen that flick, it might look completely different in comparison.  Other things I am reminded of include the extended family of Carter on ER, and all of the various athletic clubs I’ve visited in the past. I also feel slightly insulted that they haven’t nagged me about a membership yet.  I figured I would have been spammed to hell and back to pay a monthly fee roughly the same as my mortgage payment to use the tennis courts and rub elbows with the 1%.

So, force.  I never get stuff done.  I have a huge collection of books with the first 15% written.  Lots of books on the shelves with a bookmark at the page 43 mark.  I have this bad habit of skipping around, too.  Like if I have 20 chapters to edit, I will edit the first, second, get bored, skip to the last one, and then start playing video games.  A couple of years ago, at work, I started forcing myself to do stuff from start to finish.  It has convinced me that I never could have written a book in the analog days of the typewriter.  But I sometimes get results when I power through stuff like that.  It’s harder to apply to creative work; sometimes I can create, and sometimes I can’t.

I’ve also found that if I time myself, start a timer with 60 minutes on it, disconnect the internet, and force myself to either type in a buffer and get word after word on the page, or stare at the screen and do nothing, I’ll eventually start moving forward.  I guess if I burn through an hour on the timer and do not get word one on the page, that’s at least more of a victory than if I sat in front of the tube and watched an episode and a half of Chopped.

I have this book essentially done, but all of the stories need to be renamed.  I thought about going on fiverr and paying somebody five dollars a story and doing it that way.  I hate coming up with titles.  Was it Emily Dickinson or e.e. cummings who never titled anything?  I also thought about pulling a Peter Gabriel and naming my next six books Jon Konrath, except I’m sure that would somehow fuck up Amazon and all of the books would overwrite each other in some last-one-wins scenario.

I also wish Amazon listed stuff alphabetically, because then I would name it like locksmiths and bail bondsmen come up with names, something like AAAAAAA.

What else?  Closed on the house.  Bought two pair of glasses for an insane amount of money.  I am now farsighted enough that I need a second set of glasses just for reading.  This is the beginning of the end.