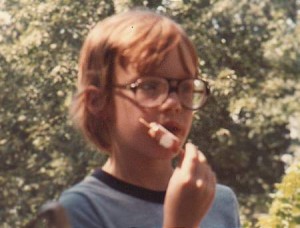 I don’t know if I believe in luck or fate or karma, but of course my glasses had to break the day before an eye appointment.  I’m working off of a migraine-inducing old pair for today, and trying to figure out if they can temporarily fix the old ones, because even if I buy a new set today, I have to wait until they can deorbit a space telescope in order to appropriate the correct size lenses to fill my prescription.

(And no, this isn’t a matter of just getting a replacement screw and a tiny screwdriver at the drug store.  I have more tiny screwdrivers than a restaurant has silverware.  And the spring-loaded hinge itself actually snapped, and does not appear to be a serviceable part.  I’d need an entirely new temple for it.)

Glasses have always been a huge pain in the ass for me.  I first got fitted for them when I was in the first grade, so I officially became “that kid with glasses” first. I got my glasses at the Elkhart Clinic, which is like a very small step up from that place where you donate your old frames and they give them to kids in Haiti.  I have severe astigmatism, so my glasses always had freakishly thick plastic lenses, until they came out with high-index lenses, at which time they went from freakishly thick to abnormally thick.

I spent a lot of high school and college going back and forth on contact lenses.  They didn’t used to be able to correct astigmatism with contact lenses, and they didn’t make a disposable lens in my prescription for a long time.  The cleaning regimen always bugged me, and I could never make it a full 20-hour day in college with a set of soft lenses, so I never stuck with the regimen, and always returned to glasses.  And looking back at some of the frames I had in the 80s and 90s, they were all truly horrendous.  Someone must have told me at some point that a bigger lens was better, or that a small lens would cost a dollar more or something, because I always got these lenses that were roughly the size of a small dinner plate.

When I was in Seattle, I tried again with contacts, and the optometrist introduced me to Torek lenses, which are designed to correct for astigmatism.  I remember the first time I wore the new pair, driving from downtown Seattle to Factoria, and everything was astoundingly clear and corrected.  Glasses don’t give you true 3-D sight; they just present a 2-D corrected portal, which means everything in your peripheral vision is not corrected.  But with Torek lenses, everything looked clearer than it ever did, probably since before Kindergarten, before my eyes started going south.  Unfortunately, they did not have disposable lenses yet, and Torek lenses are even harder to put in your eyes, because you can put them in upside-down.  I also had all of the extended-wear issues, especially since I spend all day in front of a computer.

I think they now make a disposable Torek lens for my prescription, but I have so many allergy-related eye issues, I’m not sure I would be able to withstand them.  I also thought about lasik surgery (it’s hard not to in New York – every subway car has an ad for it) but I got the initial consult, and my corneas are too thin.  There is a new procedure where they essentially implant a tiny contact lens under your cornea, but that doesn’t correct astigmatism.  They have a torek version of the implantable lens, but it hasn’t passed FDA testing, and flying to Canada to pay $10,000 for an essentially untested surgery on my eyes doesn’t seem like the best idea.

I think my nearsightedness has largely stabilized in recent years.  But I think I’m slowly getting farsighted, and find myself taking off my glasses to read fine print on things.  I don’t know if that will mean bifocals or dedicated reading glasses, since I spend all day at the computer.  I also think they can fix farsightedness with a laser.  But I will need to throw more money at new hardware.

I also don’t know what frames to get.  When I look at frames, they all look virtually identical.  It’s like when I watch one of those Heidi Klum fashion reality shows – I have no idea what looks good or bad.  And I absolutely detest that geeky looking glasses are suddenly “in”, and fashion models are wearing these nerdy, thick black frames.  This means that if I choose a pair like this, they will go out of style roughly 500 milliseconds later, and I’ll be stuck with them for another year or two.

At least this is my chance to catch up on my large-print Reader’s Digest reading.  My eye doctor caters to the glaucoma demographic, so their reading material is limited.  It’s always fun to go somewhere where I’m the youngest person there by a good two or three decades.