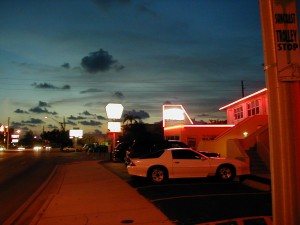 I’ve had horrible insomnia for the last week or so, the kind where you are dead tired and quickly fall asleep, then wake up 90 minutes later and spend hours completely alert, playing the “if I fall asleep now, I might still get x hours of sleep” game, where x is always too little.  And of course, playing this game is like moving your mouse every 58 seconds to keep the screen saver from ever starting.  If I was smart, I’d get out of bed, sit down here, and try to get some writing done.  But in the moment, it seems too imperative to get every second of sleep on the board I can.

My sleep hygiene has been much worse, and I expect a couple more bad nights before I will be so tired at night, the whole thing will right itself.  But it had me thinking about when my sleep cycle became such a struggle.  It used to be a fierce symptom of my depression, back in high school and the summer before college.  I had a job that summer that required me to be at the plant and ready to silver-plate band instrument pieces at 6:00 AM sharp.  The plant had summer hours where they started that early to avoid some of the summer heat, which doesn’t totally make sense, because if you start at 6:00 or 10:00, you’re still there at noon, when the sun is the worst.  But I got in this bad habit of staying up late, going to Perkins to try to write, scribbling these depressive manifestos in spiral notebooks until midnight, one, two in the morning, and then having the alarm go off at whatever unholy hour to get me through a shower and to the factory at six.

I wish I still had those notebooks, because it would be phenomenal to peer into that completely unchecked depression and see what was happening in my head in the summer of 1989, and how I recorded it.  I felt that I had a suboptimal high school experience; I made it out, but I never dated, never had the social experience I thought was standard, and it was over and done with, and could not be redone.  I knew I had college in a few short months, and I’d be able to get a mulligan on everything and start over in a new town, hopefully with a new group of people who didn’t adhere to the same bizarre taxonomy of social castes.  But I know I did not, could not focus on that at the time.

I had this feeling that something was fundamentally broken, but I didn’t know what.  My parents sent me to a shrink in my senior year, which itself was a somewhat alienating procedure, because nobody in a 1980s Indiana went to a therapist for anything, unless it was a court-mandated thing after your 25th DUI.  I went through the motions of this, and finished however many 50-minute hours, maybe 12 or 16, at which time the HMO insurance company considered me cured and stopped paying for more sessions.  I had a certain sense of relief from this conclusion, a euphoria that I was “cured” and could put it behind me and move on with life.  That lasted a couple of weeks, and then I entered the darkness again.

It takes so much effort to remember this period, partly because it was over twenty years ago, and partly because in a few years, so many points of my life would quickly become digital and more fully archived.  I have no emails or digital photos from the summer of 1989; I know I wrote a lot of letters to people after I left for school, but I didn’t type them and didn’t keep carbons.  I can’t look at my account history at Amazon.com and see what dreadful self-help books I may have been reading back then.  I kept a calendar and sporadically wrote down events as they happened, the days of concerts and meetings and orientations, when fees and dorm applications and deposits were due.  But this causes me to construct a false reality, that maybe emphasizes the wrong points, or misses others entirely.

This is, of course, not the stuff to think about when it’s 2:57 and your alarm goes off at 4:45.  And also don’t think about how you could bomb yourself out with some sedative or benzo and sleep like a baby, except you’d be out completely until ten or eleven.  Think about how to disassemble and reassemble a car engine, piece by piece.  If you miss a step, start over.  Or think about the emotions you will feel at 4:45, how you’ll wish for another hour, another five minutes in your high-threadcount womb.  Sometimes that works, too.