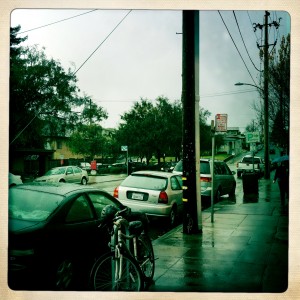 So my contribution to small business Saturday was a trip to Spectator Books and a copy of the new book of Spalding Gray journals, which has been an interesting but difficult read so far.  I saw Gray in 1998, on one of my trips to New York before I moved there.  It was at PS 122, which is this old school that got converted into a tiny black box theater, and the show must have seated maybe a few dozen people.

This small of a space for a long-form monologue was so intimate it was almost uncomfortable.  I mean, I’ve seen Rollins ramble on for four hours in a thousand-seater, and while he draws you in, he’s a little thing on a big stage far away, and no matter how intimidating he might be, there’s this separation between performer and audience.  In this little room, we were all sitting in chairs on the floor, and he’d work the room, moving from place to place on the stage.  That meant there were several times where he would stop and look right at me and talk for minutes at a time.  He wasn’t looking in my direction; he was looking AT me and talking TO me like if I was in someone’s living room at a party and someone was telling me a story.  This destruction of that performer-audience barrier gave me this unnatural, albeit brief connection to him, which made his suicide five years later a solid blow to the gut instead of just another famous-person-dies story.

Thanksgiving has come and gone.  A came up and we went to the Claremont for dinner.  Last year we cooked, and that was a real marathon; this year, A talked about hosting, but her landlord just died a few weeks ago, so that added some weirdness to the mix, and we decided to go out for dinner.  The Claremont hotel is this hundred-year-old resort in the Berkeley hills, with a phenomenal restaurant that has giant bay windows where you can see the water and the bridges in the distance.  It was crowded as hell, the hallways filled with people like a MASH hospital filled with triaged victims, and they herded us off to a huge banquet hall set up as an auxiliary buffet.  I got many calories, although I chose roast beef over turkey.  I also did not say a prayer to the jesus, so I guess that makes me a secret muslim or something.  I think I did mention jesus once or twice, as in “jesus christ, this cornbread and chestnut stuffing is incredible.”

I also have not mentioned the house drama in a while, but on Wednesday night, we signed our papers and are out of escrow on the purchase of our new place.  The loan gets funded and the sale gets recorded on Monday or Tuesday, but it’s otherwise done.  We have lived in this house for a year, so there’s no moving to be done, but this will most likely trigger several trips to Ikea.  We went on Friday, and looked at various entertainment centers, but didn’t buy one.  Maybe next weekend.  Right now, our “entertainment center” is a bookcase on its side and some cardboard boxes packed full of DVDs.

The one roller coaster event with regard to the house close is debt.  We spent a year paying a mortgage on the old place and rent on the new place, and for next month, we will have neither.  But we went from having six figures of debt, to having absolutely zero debt after the old place closed, to having even more debt now that the new place is mortgaged up.  None of that is credit card debt, and we have two paid-off cars and no student loans, but it is an interesting anomaly.

I finished another pass on this book, the follow-up to Fistful of Pizza.  There’s still no title or concept, and I feel like it could double in size and still be too short.  I also took a quick look at the zombie book I was writing for nano, and I feel like it could be salvageable if I gave it another month of work.  Unfortunately, the next month is cratered with end of year junk, doctor’s appointments and an extended midwestern trip.  But maybe a trip or two to the Goshen Wal-Mart to watch people fistfight over Xboxes will give me the creative spark I need to get this one over the top.

One reply on “Cambodia, Thanksgiving, Debt”

Heh. It's funny. I was just thinking about Spaulding Grey when I was driving back from Elkhart to Chicago yesterday. I was thinking about what a great raconteur (sp?) he (Spaulding) was when I would see him on Letterman in the '80s. I never met him in person but his appearances on Letterman were fantastic.