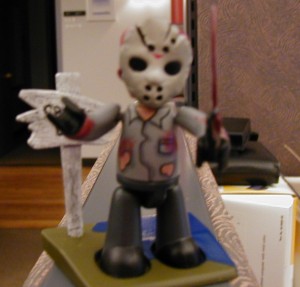 I went to bed late last night, late for someone who normally wakes up at five, anyway, after spending three or four hours trying to unlock the flamethrower in the new Jesus Zombie Massacre HD game for the iPad.  All of the caffeine and willpower eroded from my system by two o’clock, and I fell into a deep sleep, dreaming about seeing Flea on the Brooklyn Bridge, panhandling and playing Frank Sinatra songs on an acoustic guitar with only three strings.

Just as the Ambien and Gabapentin cocktail reached full fury, the phone rang, and like an idiot, I picked it up.

“Konrath!  Wrath of Kon!  How’s it going in Baghdad on the Bay?”  I could recognize the Texas drawl anywhere: it was Rick Perry.  I’ve probably written about this before, but me and Rick go way back.  Even though we completely disagree on religion and politics, he’s been a big fan of Rumored to Exist ever since some of the excerpts were published in zines back in the 90s, probably because all of the sheep-fucking references.  I think his early days as Texas Agriculture Commissioner put the zap on his relationship with farm animals, or he developed a sick sense of humor about bestiality jokes.  Either way, we’ve done a lot of zine trades over the years, and he’s always sending me sick shit in the mail when he’s out on the campaign trail.

“Fuck prayer!” he said.  “I’ve been snortin’ crank and signing death warrants since midnight.”  I heard him haphazardly disassembling and reassembling the 52 parts of a vintage AK-47, something he often did while on speakerphone and high.  “Hey man, I was just watching Fear and Loathing.  Remember last time we were in Vegas?”

It would be hard to shake the visions of that trip, one of my previous birthday journeys, where he surprised us all by showing up in a rented Kia Sedona, half the seats burned to a crisp, a rear window kicked out, and “FUCK THE POPE” spray-painted on the side.  He told me to meet him in front of Circus Circus, and when I got there, he had the minivan up on the sidewalk, and was wearing a vintage Stone Cold Steve Austin muscle t-shirt and waving around the Korean car’s mini-sized tire iron like a victim at the end of a zombie movie.  Me and my friends took him to an Irish bar and pumped him full of enough Guinness to counter all of the amphetamines coursing through his system, and blurred through the rest of the Superbowl weekend, listening to him talk about how he wanted to fuck every single waitress or server we saw, no matter how old or morbidly obese they were.  He ended up getting us kicked out of our suite in Aria, because he called the concierge every twenty minutes asking for a map of the swingers clubs on the outskirts of town.

“Hey man, I wanted to ask you about this tablet shit,” he said.  “You been following the news?”

“It’s hard not to,” I said.  “Everyone from Boeing to Whirlpool have announced their own ‘iPad killer’ for the Christmas season.”

“Everyone but Microsoft,” he laughed.  “That fucker Ballmer still owes me a hundred bucks from the baseball pool.”

“Who the sam hell picks the Mariners to go to the World Series every god damned year?”

“You should talk,” he said.  “You keep picking the Rockies to go to the postseason.  How’s their starting rotation lookin’ for 2012?”

“Go fuck yourself,” I said.

“Dude, aren’t you still rockin’ that Motorola MicroTac from like 1989?”

“Hell, no!  I got a Nokia N-Gauge off of eBay for twenty bucks.  Now I can play fuckin’ Bomberman during press conferences.”

“Well, it’s cheap, and you’ll like that, since you don’t spend a god damn dime on anything except executions,” I said.  “And technically, it’s going to be along your glide slope.  You won’t be calling me in the middle of the night bitching about DLL conflicts or .NET framework mismatches or whatever the hell.”

“I like easy,” he said.  “And it’s got that gorilla glass, so it’s not going to get fucked up like my Zune.  I had that god damned thing for ten minutes, and it looked like the surface of an asteroid.”

“To be fair, everything you touch gets fucked up like that.  I don’t think I’ve seen you not get charged for damages at a car rental counter yet.”

“Nope,” I said.  “No dice.  It doesn’t have a card slot.  You’re going to have to buy everything in the cloud.  And you’re not even buying it.  Even when you ‘buy’ a movie or a book, you’re really renting it, purchasing a license to use it, that could be revoked at any time for any reason.  Nobody owns anything anymore.”

“Fuck that!  Fuck this motherfucking cloud!  This is communism!  If Jesus wanted me to share my pornography with every fucking moonbeam hippy in the country, he’d tell me to start broadcasting it on PBS for free.  Fuck this shit!”

“Does the browser have the flash?”

“But do they track the shit?”

“Of course they track it,” I said.  “That’s the whole reason they’d even do this.  They want all of your browsing history to go straight into Skynet, so they can send the fuckin’ terminator on your ass and tell you where to spend your cash.  You buy a copy of Fight Club, and they push some bomb-building supply ads and Meatloaf album samples into your sidebar.  It’s all about getting you to spend your next dollar there.”

“I can’t do that then,” he said.  “I’m trying to run a Presidential campaign.  I can’t have some fucking Smoking Gun assholes dig up my browser history and publish stories on Huffington about how I listen to that Rebecca Black song right before I execute someone.”

“You really need to cut that shit,” I said.  “I mean, hang ’em high, but stop watching that fucking video.  You have an unnatural obsession for that Benni Cinkle chick.”

“God damn it, I don’t know what to do about this tablet thing.  I’ve gotta look cool to the youth voters, but I can’t endorse something that supports communism.  What about the iPad?”

“God damn it.  Doesn’t HP have a tablet?  Or the Blackberry people?”

“Failed, and about to fail.”

“And all of those ones with the Androids are all made in China too, right?”

“Sure.  Look, they’re all made in China.  And what kind of tablet you buy doesn’t forever brand your political status.  People who own iPads aren’t any better than people who bought the cheap-ass knockoff.  It’s just a tablet.  It’s a fucking appliance, like your fridge or your chainsaw.  It’s not going to define you as a person.  Buy whatever you want and shut the fuck up about it.”

Perry hung up, and I sat in bed, wide awake.  I really need to turn off my ringer after midnight.