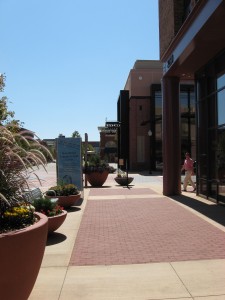 Two unrelated things that aren’t have thrown me into a fit of nostalgia today: baseball and Target.

It was the last game of the season today, and despite the fact that the Rockies had a catastrophic time this year, I forced myself to listen, to take the pain and punishment of hearing them fail miserably. They won, despite having a skeleton crew of almost all third-string players and late-season replacements against a World Series-defending team. It got rough for an inning, and I thought it would all fall apart, but they pulled it out, and ended a dismal 2011, well below the .500 mark.

I listened to almost no games this year, because after about May, things imploded like an old Vegas casino making way for a new chrome-and-glass monstrosity. And this is the first year I didn’t see any Rockies games in person. In fact, I only went to one game all year, mostly because I can’t stand watching the Giants about as much as I can’t stand going to games at Oakland Coliseum. So there was a certain nostalgia to firing up the game audio today, the same way I feel after it’s been a long winter and I tune into that first game, hear the familiar announcers, get all of the standard commercials and station identification bumpers and little audio touchstones that bring me back to the summer I lived in Denver, pulling in the 850 KOA signal on my AM radio.

My year in Denver had two distinct eras, the first being the summer of 2007, when I worked from home for Frankov’s startup, and went to every day game I could afford at the one-block-away Coors Field. But then, almost exactly four years ago to the day, I got a job as a tech writer for this internet security firm. I didn’t know anybody in Denver, and suddenly found myself driving an hour a day to this high-tech campus, or as high-tech as the area had, at least. I was the second tech writer, and the first was totally consumed with his work, so we almost never talked. And because of the strange reporting structure, my own introverted mannerisms, and this mild disconnect between me and the work culture of the tech industry, I didn’t hang out with many people at work.

What do I mean by the work culture? I guess every place I lived had its own style or flavor of the tech industry. Seattle in the mid-90s was very Microsoft-driven; MSFT was practically printing their own money, and every company was either trying to keep up with them compensation-wise, was somehow dependent on them for their livelihoods, or was trying hard to be the exact opposite of them. New York was very Wall Street, except for that minor blip of “silicon alley” doofusism that vanished when the NASDAQ did. Silicon Valley is Silicon Valley, the gold standard of tech company behavior, no explanation needed.

But Denver had its own odd little identity. There were pockets of high tech, but it was held back by this attitude by some who thought it was still the wild damn west out there. Denver 2007 was just barely Seattle 1997 to me, and socially, it felt like one in maybe five people belonged to some outback conservative christian church with kids in a lockdown academy and a barefoot wife at home. This was the land of Promise Keepers, Ted Haggard, megachurches. I’d seen worse — I spent a dozen or so years in Indiana where the ratio was more like 5 out of 6.  But it wasn’t just the politics or religion; it was a combination of that, of age, of technical background, that made me feel like an outsider there.

The job didn’t have a cafeteria, and we sat four people to a mega-cube with low walls, so the idea of brown-bagging didn’t appeal to me. Instead, I’d get in my brand new little car, and drive around the neighborhood until I landed at a fast food joint. The office sat on the edge of nowhere, a half hour south of Denver, an area with a few golf courses, an executive airport, and a whole lot of high mesa desert occasionally punctuated with strips of prefab big-box culture dropped on straight roads spaced apart at a mile per. Twenty years before, it was probably all barren cattle-grazing land, when an invisible SimCity player in the sky clicked and dropped all the big names down: Safeway, Chipotle, Chili’s, and Target, with a peppering of Subways and cell phone stores. From horizon to horizon, you’d see the orange-brown Colorado high plains, littered with the same exact stores I’d seen in every other place I’d lived or visited.

I’d always end up at the same two or three places, mostly Taco Bell or McDonald’s. I’d always bring a book, sit in my car, eat the same thing every day and read. The Yaris still had the new car smell and the novelty of car ownership I’d missed during my time in New York. I think I told Sarah one time about how I preferred to eat alone like this every day, and it depressed her, but I liked it. After almost a decade of being surrounded with ten thousand people in the same city block as me, it felt so nice to be absolutely alone.

It would take me five minutes to drive to Taco Bell, and ten to eat my Mexican pizza and nachos. That meant I’d had another 40 minutes to kill, until I’d need to tech write my way through the back half of the day. I’d inevitably end up at the big Super Target on Lincoln, this massive version of the familiar red department store, a two-story version with a double-decker parking lot and a grocery store welded to the side. I’d sit on the top deck of that garage, and you could see this great expanse of nothingness to the south, rolling hills and scrub brush and mountains in the distance, the ribbon of I-25 stretching from Lone Tree and vanishing on the horizon of Castle Rock. I’d go to Target for everything and nothing, to look at the twenty-dollar polo shirts and the seventeen different kinds of car air freshener, and end up with a case of Coke and some new cat toy we didn’t need.

But I mostly went to watch, to see who ends up at a Target in the middle of the day. And the answer, at this Target, was apparently nobody, because I’d only see a small trickle of stay-at-home moms, all younger than me with a gaggle of kids in tow. This wasn’t like the LA I’d know a year later, where in the middle of the day, you’d see all kinds of people and wonder who in the hell actually worked in a town like that. This reminded me of the solitude of working a day shift at the mall back in Indiana, where you’d only run into geriatrics and pediatrics. It had this certain feel to it, a feeling that I shouldn’t be there, the same feeling I had when I skipped a day of high school and saw a world I didn’t belong in.

And the visits to Target tied into that first era. Sarah worked a lot at her job, working nights, weekends, long days. And we didn’t have cable, didn’t watch TV, didn’t do much of anything outside of work except try to regroup to get ready for more work. And it seems like we spent an inordinate amount of time at the Stapleton Target, undergoing consumer therapy by experiencing the big box lanes of SKUs in a store that we didn’t get to experience in Manhattan. We’d end up with hundreds of dollars of damage in those white and red bullseyed bags, Method, Archer, Market Pantry. I’d have the next PlayStation game that would consume my off-hours in my little office, and whatever little cellophane-wrapped junk food I’d consume at my desk while listening to those games and not writing my next book. But those trips to the world outside the womb of my home office were strikingly themed by the uniformity of the Target experience. And when the first era quickly ended and the second era made me miss it, those trips to another branch of the same outlet let me briefly revisit my lost summer.

Now, four years, later, twelve hundred miles away, and 5280 feet lower, everything is different, except a daytime run to Target. They just built a new one, about a mile from my house. Now that I work from home, I’ll end up there after lunch, to pick up a case of (now diet) Coke or a box of Claritin. And it’s a different shape, a different layout, but the same experience, the same types of daytime shoppers, the same red-shirted staff and aisles of things I don’t need but will probably buy.

This nostalgia is a painful and potent drug for me, something it’s very easy for me to get lost in.  I can waste far too much time exploring the connections and bridges of a present day to the past, grasping at these raw feelings I try to replay as a time machine to a distant era or pleasant memory.  I stumble across these things, like the smell of a faded air freshener or an old receipt to a lunch from 2002 stuffed in the back of a book, and it can trigger this rush of thoughts back to that time.  And I spent 1999 wishing it was 1992, and 2008 wishing it was 1989, and now bits of 2011 wishing I could open a window to 2007 and take a quick look again.  I wonder if I’m the only person who does this, if I’ve accidentally segmented my life into these predefined periods by moving and changing jobs, or if it would be the same if I still lived on the same street in the same town where I grew up.  It’s hard to be present in now, except that I know at some point in the future, I’ll be looking back and remembering 2011 again.  And maybe the bridge will be a consumer store, or maybe it will be a kind of food or a song or the sound of an appliance or the smell and feel of an autumn breeze at the tail-end of a long summer.   But I know that it’ll happen, at some point.

And now, I’ve gotta stop doing this, and go immerse myself in the now of trying to write my next damn book.  Stay tuned.

One reply on “Targeted Nostalgia”

No, dude, I assure you that you are not.