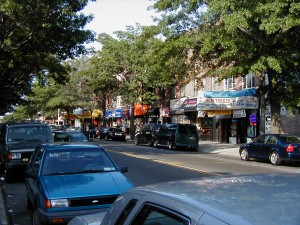 I was listening to Mark Maron’s podcast the other day – specifically, an interview with Aubrey Plaza – and they started talking about how they both used to live in Queens.  But then Maron said where he lived, which was at 37th Street and 30th Avenue, and it completely blew my mind, because I lived about a block from there, at 36th and 28th.  And we both lived there at the same time, which means we shared the same subway stop, and the same restaurants and bodegas and fruit stands and drunken assholes sitting outside of cafes, blocking the god damned sidewalk.  And I’m sure my day job and his life as a late-night comedian probably didn’t place us on the platform for the N train at the same times, but I’m sure there must have been at least a couple of occasions when we were up there, looking down the tracks and wondering where the hell the next train was.

That’s a reminder that the world is much bigger than I imagine.  Or maybe I mean more dense.  I came from a life where you knew every single person in your neighborhood.  Our subdivision had a homeowner’s association – not like a condo HOA where you were required to be a member, but rather a group of do-gooder PTA motherfuckers that liked to be overbearing and have a Christmas decoration contest and post crimestopper signs that did no good and that sort of crap.  And they used to put out an annual directory, a photocopied thing that listed every damn person in the subdivision, along with their kids’ names and if any of them did chores like babysitting or snow plowing or whatever.  I think the whole purpose of the thing was to shame people into giving twenty bucks to the group, or maybe because people were so god damned proud of their kids, they needed to show everyone how many of them they had.  I don’t know, but I know in my infinite boredom stemming from a life of only five TV channels, I pretty much memorized that book and knew the names of every person in every house of our neighborhood.

The entire city of Elkhart – not just my little subdivision – had a population just under what Astoria’s population was, except Elkhart is about 25 square miles, where the 11103 is maybe three-quarters of a square mile.  So you’re talking about a serious number of people piled on top of each other; nobody’s got a giant ranch house or a backyard or even a place to park a car, let alone a collection of cars, like pretty much everyone in Elkhart has on their front lawn.  And at first, this was overwhelming to me.  When I first visited New York, I was amazed that it wasn’t just one single main arterial street had clusters of stores and shops, like every town in the Midwest.  Every time you turned off of one street and onto another, that would be a main drag too, with wall-to-wall storefronts.

But at some point, I got desensitized to all of this, and had this mental picture of my neighborhood as having vast amounts of nothing.  I mean, I’d have this internal diagram that would say “my house, five blocks of nothing, the Key Foods, two blocks of nothing, the subway stop, and then ten blocks of nothing until the tunnel and the city.”  In reality, every one of those blocks of nothing had thousands of people living there.  And even though half of the storefronts in Astoria are abandoned and boarded up and probably used as illegal gambling halls, and of the other 50%, a certain plurality were these stores with maybe $17 of merchandise on all of the shelves, probably because the place was a mafia front. But there were all of these places where you could get lost forever, that were their own worlds within one street address.  I’d duck into that horrible Rite-Aid on 30th, and it was not the world’s biggest drug store, but it was its own universe, once you got in there and got stuck waiting an hour while the only cashier finished her cell phone call and rang up your purchases.

I still feel like that now.  I mean, there really is nothing in my neighborhood – we’re like on the edge of the ghetto, patiently waiting for gentrification to happen, maybe the next big earthquake to suck under a mass of old Victorian crackhouses and leave room for a new Trader Joe’s. But then when I go back to Indiana, everything truly looks abandoned.  It always amazes me when I go back there, because it looks like some post-apocalyptic movie, where the whole population has vanished.  And when I did go back to New York, I felt overwhelmed again, which means my sense of scale has reset itself.  But the moral of the story is I should be taking a closer look at what’s around me.

Anyway.  I spent far too long looking at the picture above, then looking at Google Maps, to see if that is indeed 37th Street and 30th Ave, and I think it is, but you can’t tell because so much of the stuff has changed hands.  Someone said you’re officially a New Yorker when you say “do you remember when this used to be a ______”?  Yeah, something like that.