This is the N: 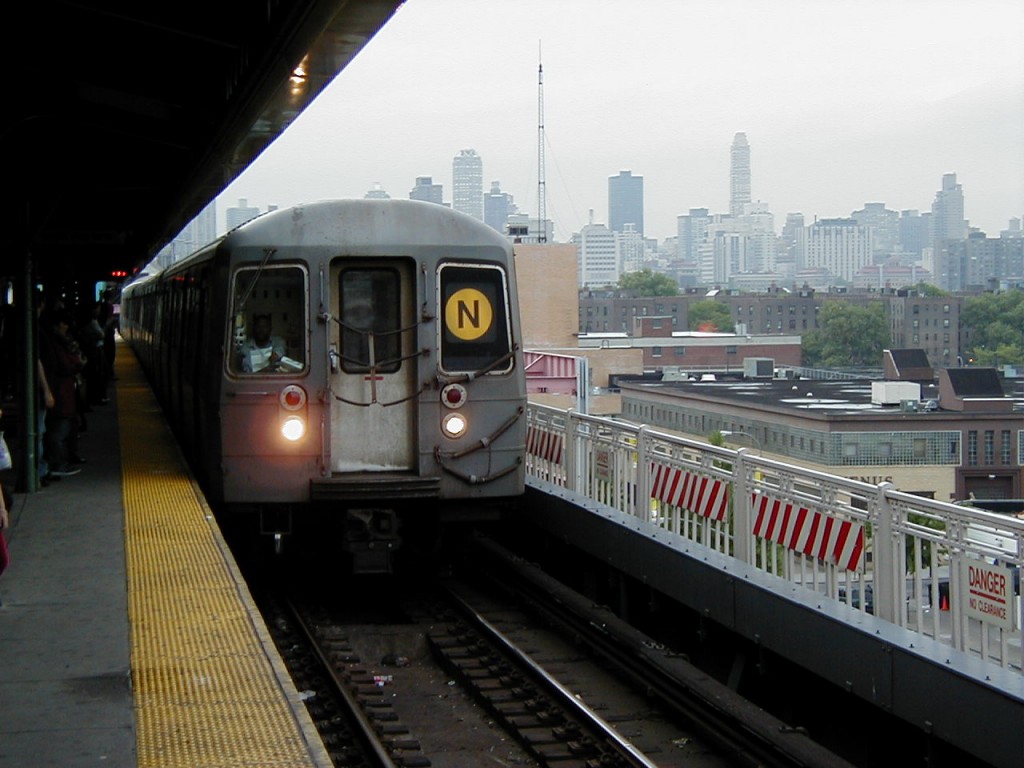 I took this picture just over ten years ago.  I was on the way home from my second date with Kelly.  We went to Jackson Heights, and then to Target.  It doesn’t sound that exciting, but when you live in New York in 2001 and you spent a good chunk of your life in Indiana, and suddenly, there’s no Target, the idea of taking two trains and a bus to the middle of nowhere in Queens to see a real Target is pretty enticing.

That picture was taken on Queensborough Plaza, which is the first stop in Queens after the N train goes through the Steinway tunnel and under the East River.  It’s the start of a new borough, a transition to a different land, and the point where the normally-underground subway train suddenly appears up on an elevated platform that snakes above the rooftops in Long Island City and Astoria.

I hated the N train.  The N and R trains ran into Queens, and they stood for Never and Rarely, because you could wait forever for one of the damn things to show up.  And while you were up on that elevated platform, freezing your ass off in January as the wind tunnel effect made the extreme weather even worse, they’d run twice as slow.  And while those A trains or F trains ran every 2 minutes for the last century in “The City”, the MTA had this habit of randomly shutting down the N trains all weekend, which started roughly around two weeks after I moved to Astoria, and went on until about the time I left.  They said it was for “station work”, but I was almost certain that some Sopranos wannabe motherfuckers paid off the MTA to force all of us to spend our money in their craptastic shops and restaurants all weekend.

Queensborough plaza was in a sketchy neighborhood, a part of Long Island City where everything around was either taxi repair shops, scrapyards, or the kind of strip clubs you go to if you have a c-section scar fetish.  There was also a “bootleg” Dunkin Donuts there; it had a sign with the same font and same colors as the real place, but it just said “fresh donuts” or “fresh coffee” or something.  I was waiting for the whole thing to get painted over after a cease/desist, but there were a lot of blatant trademark violations in Queens, and nobody gave a shit.  There was this place on 30th Ave called Pinocchio Restaurant, and I swear they had a pixel-for-pixel copy of the genuine Disney artwork on their sign.  I don’t know if a lawyer from Walt’s parent company woke up with a horse’s head in his bed one morning, but the damn thing’s still there today.  I desperately wanted the Olympics to come to New York, just to see all of those IOC lawyers try to shut down every business in Astoria with the word “Olympic” in their names, which is about 70% of them.

Two train lines butted against each other at that station: the BMT’s N/R and the IRT’s 7.  The 7 was the line built to run up to the World’s Fair, and they ran those famous red subway cars, which have since been stripped and dumped in the Atlantic to form an artificial reef.  I’m guessing this is the train John Rocker took out to Shea Stadium described in his infamous rant that got him all kinds of love and adoration from New Yorkers.  On the day I took this picture, we returned from Target on the 7 train, and then I switched to the N to go home, while Kelly got on a different train to head back to Brooklyn.

I spent so damn much time on the N train.  A rough order-of-magnitude guess is 2 times a day x 5 days a week x 50 weeks a year x 5 years = 2500 trips.  Each trip took about 45 minutes, so that’s roughly 78 days of my life.  Yeah, I invested that time into reading, and I probably read a book or two a week, but that’s still a lot of strap-hanging.

The whole idea of the subway seems a lifetime away for me.  I can’t even fathom any part of my existence back then: being single, living in such a big city, living in such a fucked up neighborhood.  I think about it a lot, because I’m at the same job as back then, and I’m working on docs for the same product (among others), so I often play dumb games like “what was I doing around the time I first started working on this?”  I think back to when I was struggling to get Rumored out the door, when I was trying to date, when I would take any free time I had and scrape up enough dough to get on a plane to Vegas, just so I could rent a car and drive again, and be in an open area that didn’t have a fifty thousand people per square mile.

And I think about life now sometimes – like I was in the parking lot of Target the other day (honestly, Target isn’t paying me to mention them in every damn post I put up here) and I was just thinking “fuck, I’m living in California.”  I get so busy with the day-to-day that I don’t even think about it, about how 25 years ago, California was this far off, distant land only seen in movies, and it may as well have been the planet Vulcan.  And now I’ve lived here for three and a half years, and I still don’t even realize it until I’m outside on a nice sunny day, and I realize it’s something like -60 degrees in Elkhart and I haven’t had to dig a car out of a snowbank for decades, and I really do live within a stone’s throw of the Pacific Ocean, a body of water I never even saw until I was 26 years old.

So looking back at pictures like this, the old rolling stock of the MTA, that look of soot and skyscrapers and brick project houses and a view of Queens so vivid, I can practically hear the car alarms and jackhammers at five in the morning and the taxis laying on their horns continually, and it’s a huge time machine for me.  It’s not that I want to go back or that I miss any of it, but it’s a huge reminder that even though I feel like the same person and the same old crap is going on every day, so much time has passed between now and then, and things have changed so radically.