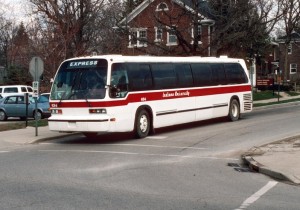 When I first visited New York in 1998, one of the things that struck me, an odd connection to the past, were the city busses.  I don’t even remember if I rode on one – I never really figured out the schedule, and it was usually easier to walk to a subway stop – but they looked exactly like the same busses we had in Bloomington when I went to school there.  It freaked me out at the time, because I couldn’t think of two more disparate worlds than the late-eighties IU campus, this few hundred acres of green grass and the occasional limestone castle of a classroom building, and the concrete jungle of Manhattan in the late nineties.

Both IU and the MTA had these busses, built by GMC, which upon further research were called the GMC Rapid Transit Series II. The RTS looked like a giant pack of gum, a squarish tube with a flat front end and a slightly futuristic look, in the same way a Disney monorail looks futuristic.  I grew up as a captive in those standard Blue Bird school busses, the kind that could be from 1997 or 1947, with the little square windows you could use to watch the suburbs scroll by on your way to and from your classroom of doom.  But the RTS had these giant rectangular tinted windows, and inside, almost every vertical surface was transparent to the outside.  Both IU and NYC’s busses were mostly white, with a small bit of accent color on them, a crimson stripe or an MTA blue bar, respectively.  I always remember that the difference reminded me of George Lucas’s treatment of the R2 droids in Star Wars; they were mostly white and chrome, but those little blue accent panels on the R2-D2 got swapped out for orange ones so it could look like a different droid.

I only really rode IU’s bus during the fall semester.  They ran a couple of bus lines, denoted by letter (and color) almost like the New York subway system, with the A bus making a loop around campus, and the C and E continuing out toward the campus mall.  When I first arrived in Bloomington, I was convinced it would take me hours to traverse the campus, and bought a bus pass.  They had two options: a full-time pass, which cost a few hundred dollars, and a night/weekend plan that cost something like $53, which is what I chose.  Two years of driving everywhere in rural Indiana reinforced the belief that you had to have a car to live in the Hoosier state, and I feared that first time I’d need to get to the mall to buy something important and I’d have to ride my rusted ten-speed the grueling 1.2 mile distance.  By the time I moved off-campus in 1991, I’d walk absolutely anywhere, in any weather, provided I had enough juice in my walkman to power a tape for the whole journey.

I have very distinct memories of riding that loop around campus.  There were these rubber pneumatic strips on the vertical pillars, and you pushed them to ding a bell and alert the driver you needed to exit at the next stop.  I’d look up at the glossy white ceiling and gaze at the emergency exit hatch worthy of a space capsule, wondering what kind of catastrophic failure would require egress if the bus never really got above ten miles an hour.  I’d sit in on the molded plastic seats, and I’d watch the green campus crawl by.  And I remember many a long wait at the mall, sitting at the corner in front of the Sears, waiting for one of the big white rectangles to cruise down the road and stop with a pneumatic hiss and open its doors for our return to campus.

The campus bus was also this connection back to my first visit alone to Bloomington.  I remember having a very different perception of the campus, before I started classes, before I really settled in.  I think it was my view of the institution of college in general, as seen from the eyes of a high schooler.  I didn’t spend decades planning on attending IU – I didn’t have any family members or friends who went there, and I thought I’d end up at Ball State, until maybe the January of my senior year, when I changed my focus.  I did that parent weekend visit, where you show up with your folks and the school tells you how great it is and how you should really give them your money (red carpet days?) and it all looked so hallowed and distant to me.  All of the students there looked a decade older, even though most of them were mere months ahead of me.  My perception of college life was formed by 80s movies like Breaking Away or Revenge of the Nerds, and I thought everyone was a rich jock or a supermodel-to-be, and it was all very intimidating to me.

But aside from the people, I had this perception of the campus as this hundreds-of-years-old institution, with the ivy-covered buildings and towering library and these bars and hangouts like Garcia’s Pizza and Nick’s and Kilroy’s.  And part of this perception was that the campus was immense.  When I visited that summer before my first semester, I drove down from Elkhart and stayed at Foster quad, which is on the north side of campus.  And they had some special shuttle bus set up to haul everyone from Foster down to the old crescent of campus, to Franklin Hall to meet with advisors and take placement tests and register for classes and do other things involving many scantron forms and number two pencils.  And I remember taking one of these RTS busses for the slow crawl around the campus, down Jordan and across the long stretch of Third Street filled with greek houses and old buildings, and then around the corner by the Law School and up Indiana to the division between the old original campus and the downtown.

I walked past all of these little stores, like the White Rabbit place where you got rugs and posters for your dorm room, and Discount Den, where they sold used CDs and everything imaginable with an IU logo on it.  That stroll around the Kirkwood Avenue buildings, eventually culminating with a lunch at Garcia’s Pizza, is where my perception started to change, from the campus being this distant Hollywood-formed entity to being my home for the next half-decade.  I didn’t know this change in perception had started, but that first glimpse of my new life is what I always remembered every time I got on one of those busses.

And then, a decade later, I’m in the same exact bus, with a different color stripe.  Except instead of being the A bus lumbering past the Arboretum and toward a giant limestone library, it was the M60 going from Harlem, across the Triborough bridge and into Queens.  Even though the lush green lawns got replaced with block after block of graffiti-covered buildings climbing into the sky, I still remembered that July day in 1989 when one era ended and another one began.