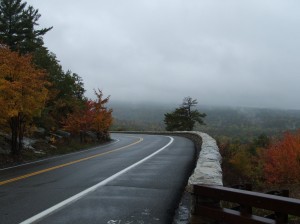 I took the standard drive-to-Florida Disney vacation when I was twelve, and I’d been to a bunch of the plains states by then: Missouri, Iowa, the Dakotas, Wisconsin.  But in the summer between my junior and senior year of high school, my dad took us on our first big trip out of the Midwest, this two-week journey to upstate New York.  And at the time, I was bored out of my mind, depressed about being away from my car for so long, obsessively reading the JC Whitney catalog in the hundred degree heat.  But we did a lot, saw a lot, and it’s one of those things I always plug into my mental wayback machine, trying to remember the little details or uncover something on the web that connects back to it.  I didn’t have a camera back then, and I never wrote anything, so it all seemed lost to me.  But thanks to the magic of google maps, I did manage to dig up some of that past.

We visited upstate New York because my stepmom’s family vacationed there.  It was the typical Italian-in-The-City migratory thing, where you rented out one of those little camps for a couple of weeks and sat around and played bocce ball and ate a lot and slept in little cabins.  We didn’t stay in the same compound as the rest of her family though; we rented basically like a motel room with an efficiency kitchen near the city of Cairo.  I remember Cairo as being just like all of those other little thousand-person Catskill hamlets, with a single main street and a general store and some other mom and pop places, like a pie store and an IGA grocery.  I drove around there in 2000, when I rented a jeep to bug out of the city for the weekend, but I couldn’t remember where anything was, and I think one of the main state roads running east-west got rerouted and widened, which threw off my mental landmarks even more.

I recently took a look on google maps, because Randy wrote about camping in Cairo.  Last I checked, the resolution on their upstate NY maps was roughly Commodore-64-grade, which wasn’t helpful.  But when nosing around, I found a little clue that zeroed me in to exactly where we stayed.

So, it’s July 1988, and I spent two days in the back of a pickup truck, sleeping on a mattress with all of our luggage, reading all of the Hitchhiker’s Guide books in one pass while watching Ohio and Pennsylvania scroll past me outside the truck cap’s plastic windows.  We got to Cairo, unloaded in this Bates-style motel, and spent a lot of time swimming, because it was always a hundred degrees and you could see the humidity.  The complex was a cluster of small buildings, each one with two units, on a horseshoe drive curved around a main house and an in-ground swimming pool.  Most of upstate New York like this is not in cities or towns, but just the occasional house off to the side of a heavily wooded road, which isn’t conducive to a teenager with no car who just wants to wander around parent-free.  On the first day, I hiked down the highway, my jambox on my shoulder, listening to Back in Black, and I walked about a mile to a gas station to buy a single Coke, which I then drank on the way home.  Of course, the whole voyage was a push, considering how much I sweated on that walk, but it was one of those journey-is-not-the-destination kind of walks.

The next day, I went to this restaurant to get a coke, and that’s my big clue on this search: the Stone Castle.  It’s now called The Stone Castle Inn, and it’s a, well, stone castle; a turret sitting off of this sleepy little road.  I walked over there one day and ordered a coke, but they had no to-go cups, so I sat in this heavy wood restaurant that I think used to serve German food, the prototypical German restaurant with high ceilings and a huge stone hearth and dark wood everywhere.  I guess the place has since been restored and is now an Irish pub, but more importantly, it is on Google Maps, and our place was right next door, so it zeroed me in and showed me I had been searching up and down state road 23, when I was supposed to be looking on state road 145.  If you go here, you can see that horseshoe drive, and the swimming pool to the northwest.  It’s even got a street view picture, although none of this is as high quality as if you aimed google maps at, say, Palo Alto.

If you go northwest on 145, you come to Hitchcock road.  We used to load into the pickup truck, and drive up that road to 32, which crossed Catskill Creek here.  When the motel pool got old, we’d swim in the river. It was blocked partially by a dam to the northwest, which formed this nice little pool with some falls that were perfect for inner tubes.  The water was always cool, crystal-clear, like swimming in bottled water.  I remember sitting on the beach by that water, talking to some older kids who wanted to know where we were from, and when I mentioned Indiana, they said “Bobby Knight, right?”  The one thing I learned on this trip was that Indiana, which was my entire universe at that point, only held a fraction of a fraction of a percent of peoples’ collective consciousness outside of that state.  I always – and still – marvel at what one or two random factoids people do know about the Hoosier state.  Back then it was Bobby Knight, David Letterman, and maybe band instruments like Selmer.  This was pre-Shawn Kemp, pre-kid stuck in a vending machine, pre-meth lab Indiana.  And those “older kids” were probably all of 19 or 20, which seemed like adults to me at the time.

The first time I ever flew was here too, at the Freehold Airport.  (here, here.)  We drove by here, and they had some deal where you could fly for 15 minutes for ten or twenty bucks, so me and my two sisters piled into this little Cessna and took off.  (It was probably this blue and white Cessna 150 shown on this page.) I loved airplanes, but had never been in one.  I got to sit in the front of the little VW-sized cockpit, and the pilot told me not to touch anything, because I had a yoke and a set of rudder pedals right in front of me. I remember so distinctly when those tricycle gear wheels pulled off the ground, watching the ground fall below us, and flying at a few thousand feet around the area.  The pilot asked where we were staying, and we flew over the motel, looked down at the creek and the bridge and the dam, saw little tiny people swimming and tubing in the water below.  It would be seven years until I got on a plane again, not out of any fear of flying, but just because I never had the money or reason for air travel.  But being in that little Cessna made me want to fly, made me spend way too much time kicking tires at airshows and screwing with crappy flight simulators on outdated Windows machines, wishing I could jump in a tiny plane and cruise around at two thousand feet, looking at the scenery.

I’ll have to do more digging to find out more about this place.  I remember we also went to Woodstock, the Zoom Flume water park, and Hunter Mountain.  But what I remember most is how those daytime activities, the little field trips to see old bridges or small towns, were punctuated by these longer periods of boredom and late-night depression.  I thought all of my melancholy feelings had to do with being in Indiana, being around the people in my school, but when I was a thousand miles away, I still felt them, and knew something was wrong.  I didn’t fully realize any of this until a few months later, sitting in a psychiatrist’s office, trying to unravel all of the depression and confusion.  At the time, I just wondered about the strangeness around me, taking in all of this alien scenery of small town New York, listening to people talk about the muggings and rapes and crime of The City, not knowing that in just over a decade, I’d be living there, too.

Anyway, bottom line, google maps is a huge time suck, and take more digital pictures, while you have the chance.