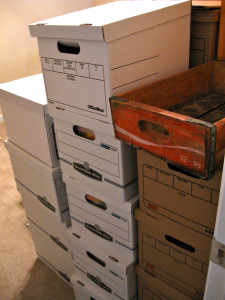 I went to my storage locker the other day, to drop off one of those plastic tupperware bins filled with old 8-bit computer pieces and a half-dozen MiniDisc players in varying states of decay.  I have this locker that’s about 4 by 8 feet and maybe five feet high, on the top floor of an ancient warehouse in our neighborhood, the kind of place that always reminds me of that scene in Indiana Jones where they file away the Ark of the Covenant in a crate in the secret government warehouse.  It has this smell to the place that reminds me of the smell deep within any large military watercraft, which I can’t really identify and is probably either the scent of infinite coats of lead paint or some government-strength rodenticide, either of which is probably eating away my brain as we speak.

Nobody I knew had storage spaces when I grew up.  That’s because everyone in Indiana had a basement and an attic, and both of those filled up with the overflow of holiday decorations and second refrigerators and unplayed board games and excess patio furniture.  If you lived in a trailer or in a house with a slab foundation, you’d get one of those Wal-Mart 10×8 metal sheds.  While I knew nobody in my childhood that itemized their taxes and needed to keep ten years of receipts in boxes, I knew plenty of borderline hoarders who absolutely needed to keep every limited-edition Long John Silver’s Joe Versus the Volcano collector’s cup, patiently awaiting the eventual invention of eBay to justify holding onto all of this crap.

Since graduating high school, I’ve moved 15 times, with four of those being cross-country or across a good chunk of the country.  Each time, my collection of various memorabilia gets compressed and rehashed, and I change my mind about just how important it is to keep zines I haven’t read since 1994 or printouts of rough drafts of books I’ve long ago published.  But from each era, some pieces still remain, and when I shift through these boxes and bins, there’s a pattern, like an archaeologist digging through layers of an old swamp to find fossils of a certain epoch.  I used to keep these crates in a closet or spare room, but when we moved to this open plan loft condo, I don’t have an area for this crap, which is why I rented the storage unit.

The main advantage to keeping this stuff off-site is it’s much harder for me to revisit it.  I have an entire internet’s worth of distractions to keep me from writing; having boxes of old high school journals and letters from college is pure danger for my work ethic.  I can easily open any of these boxes and waste infinite amounts of time getting nostalgic about some past period.  Now, I have to drive my car there during business hours, remember my code to get into the building (I always forget it, and have to look it up on my phone), and climb four flights of stairs in a non-air-conditioned building, which is enough of a deterrent that I only get over there a few times a year.

I generally think two things when I look at all of this old crap.  One, I have a lot of letters and I used to write and receive a ton of paper mail.  I don’t know the last time I got an actual piece of paper mail other than a bill, a greeting card, or some piece of paper spam because some douche got the public record of everyone who paid property tax in Oakland and blasted out a form letter disguised as a tax document.  It’s odd to think that people used to communicate through messages written on paper, and that this has been entirely replaced by electrons blasted across fiber optic cables.  I try not to dig through these too much, because it’s hard for me to read just one letter without reading all 8,732 letters I have in this plastic bin, and that gets depressing fast, especially knowing that at some point in maybe 1997 or 1998, this form of communication completely dried up for me.

The other thing is I have this container of old photos, and I always wish I would have taken more or better photos way back when.  Back in the days of film cameras, I’d maybe shoot a few 24-exposure rolls a year, because of the cost of film and developing.  There’s also the issue that I can see pictures now right after I take them, so I take way more of them, and if I screw one up, I can retake another one.  With film, if my finger was over the lens or the light wasn’t right, I wouldn’t know it for weeks or months.

When I was writing Summer Rain, I would have killed for a few dozen 1992-era photos of the Bloomington campus, or my old house on Mitchell Street, or some of the people I wrote about.  But I didn’t even own a camera then.  I have a couple of shots of the house as I was moving out, in 1993.  And I shot a few rolls of film that summer, some stuff of me and Ray at the Milwaukee Metalfest, and me and Tom screwing around at Ox Bow Park.  I think I have a handful of pictures I took at the start of the summer of 1992, probably with my mom’s camera, but that’s it.  I’ve taken more pictures in the last week with my phone than I did in that entire year.

A recent internet find that really pained me about this was at How to Be a Retronaut, which was a photo essay on a bunch of shopping malls in 1990.  Oh man, that set of pictures brings back so many memories of that era, of when I used to work in a mall back then.  It’s so strange that 1990 does not seem that long ago to me, but when you look at these pictures, some of it seems so distant and so different.  I don’t want to go back to 1990, but I wish I had bought or borrowed or stolen a nice SLR camera and passed as many rolls of 35mm as possible through the gates and taken pictures of every square inch of the Concord Mall and Scottsdale Mall and every other place I wasted time as a kid.  Of course, if I did, I’d be burning hours and weeks and months of time trying to scan and crop and upload all of this crap to the web, and it still would not be enough.

Well, before I start trolling eBay motors looking for 1974-1977 Camaros, I should end this.

4 replies on “The pros and cons of storage”

Have you already scanned those Metalfest pix?

I think I have a lot of them scanned. I thought that when I scanned all of my negatives back in 2006 that I must have scanned all of them, but I'm now starting to see I did not do 100% of them, and I'm not happy with the quality of the scans, which means at some point I am going to have to invest a thousand dollars and two months of my life re-scanning this shit.

I feel your pain, bro. I should've found a way to hang onto that straight-six '62 Impala I picked up for a song in upstate New York. If I had to do it all over again, I would've quit college, got a job flipping burgers, and lived inside of it until I could finance a new interior and a 409. But then there was baseball, and girls, and school, and girls. Luckily, each of these late 80s/early 90s distractions provide fertile story ideas as well. There are some vestiges of time I can do without, too, like the mullet I was rocking back in '88. Such a follower.

I did learn to drive in a puke-green $500 '70 Impala. It was like sitting on a couch watching the road go by outside your window, except for the extreme noise and vibration. And it took all of my 15-year-old 110 pounds to smash that manual brake pedal to the floor.