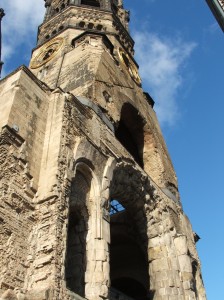 Everyone is talking about how the world is ending on Saturday.  It’s like the Sarah Palin of news stories right now: incredibly embarrassing, and something that won’t go away if you keep talking about it.  So of course I’m going to write about it, because that’s what I do.

I wasn’t raised believing the rapture; I was brought up Catholic, and it’s not part of the Catholic doctrine.  But I remember the first time someone laid out the Book of Revelation to me as prophecy, which was in grade school.  I had a friend, also named Jon, who went to some fire-and-brimstone church, and one day at recess, he told me I was going to hell because I was Catholic, and started talking about the moon turning red with blood and all of this other crazy stuff that sounded more like a horror movie than any part of the bible I knew about.  Of course, I was not a biblical scholar back then — I’m still not, but back then my working knowledge was pretty much limited to the stuff we covered in CCD class.  (And if you’re one of the christian sects that thinks Catholics are satan worshippers, you’ll probably also be quick to point out that the Catholic bible is different and includes all of this other junk that the “real” bible doesn’t.)  I probably knew there was a Book of Revelation, but I didn’t sit down and look at it until much later, probably when I got into Iron Maiden and wanted to fact-check Number of the Beast.

Jon was a weird dude, and he must have gotten ahold of one of those Jack Chick comics that week or something, because he got off of the topic and we remained friends for a good decade or so after that.  His mom was some kind of hippy who didn’t let them have a TV and they eventually took off for Alaska.  We later got back in touch; he’d joined the Army to get out of Alaska and ended up in West Germany and then Desert Storm.  He got back and I saw him once in 1991 before he vanished off the face of the earth.  But that playground discussion as a kid stuck in the back of my head and didn’t let loose for a long time.

Growing up in Elkhart, there were a lot of evangelical churches, many people biding their time until the second coming, thinking they’re one of the chosen few who will magically ascend when the shit goes down.  It seemed like every abandoned movie theater got turned into a makeshift church, and like liquor stores, the worse the economy got, the more churches popped up.  And as a kid who listened to too much heavy metal and counted the hours until I could split, I disagreed with pretty much every piece of religious doctrine that got thrown in front of me.  I saw the end times as this huge bait/switch, something used to justify this huge ponzi scheme that managed to shackle every person in my podunk town with despair and misery.

What always got me about Revelations was that nobody could agree if it was stuff that was going to happen, stuff that did happen, or stuff that was a neat story with some allegory about how we should feel about god.  When I got past the point of actually believing in any religion and started looking at the bible as a literary and/or historical work, I found it somewhat humorous that this could essentially be the story of the first century of the church, and all of these people were looking at it like it was a sentence that would be served any day now.  I looked at the bible like I looked at any conspiracy theory, like the JFK assassination, starting with the conclusion and a bunch of loose pieces of evidence, trying to backfill the timeline and piece together some esoteric explanation about how it all fit together.  I eventually got bored of this, especially when the climate changed so much that if you did not agree directly with every micron of someone else’s opinion on the subject, you were a satanic child molester that deserved to bathe in the fires of hell.

Now, I don’t care.  And it’s odd to see the story have legs as much as it does right now, with everyone talking about how the world will end this Saturday, because of some loon (who, coincidentally, happens to also live in Oakland) who has been advertising it on billboards and the sides of busses for the last few months.  This has been predicted many times before, and I’m sure roughly 27 minutes after the time passes this Saturday and we don’t all blow up, everyone will have forgotten all about this guy, and some other guy will realize throwing another random date out there is a great way to get some free press and make a few bucks.  Its interesting that there are a lot of fringe way-out denominations that do believe in the end times, but I don’t see any of them putting their chips down on the same number as this dude.  Either they’re going to wait and see if it happens, or when this guy flubs up his numerology, they can all pop out of the woodwork and shout “false prophet!  You need to buy my book and find out the truth!”  Or they’ll say “well, that was just a metaphor or some shit, and here’s why you really need to pay attention to this crap.”

Life’s too short.  I’ve burned up too much time reading crap about this on Wikipedia.  Oh, and Vangelis Papathanassiou had this prog-rock band called Aphrodite’s Child that did a concept album in 1972 based on Revelations.  It was titled 666, and has nothing to do with Iron Maiden or heavy metal whatsoever.  But it has a couple of really trippy songs on it, including this one “The Four Horsemen”, which is completely unrelated to the Metallica song by the same name.  I’ve listened to it about 17 times in a row while writing this, and now I think I’m going to have to either stop listening to it or drive into the city and see if there’s a place I can buy a pair of flared jeans, a silk shirt, and about 4000 dried grams of mushrooms.

5 replies on “Please Shut the Fuck Up About the Rapture”

If you can't find those things in the SF area, you won't find it anywhere else.

I'd still numerology Sarah Palin. She's hot. Sure, I don't want to listen to her, but that was true with half the women I've actually dated.

L-train: have not been able to find a GIF of Palin in clown makeup, so you're going to have to settle for beating it to a photoshop.

I actually enjoyed this!

In March, I went back to Kokomo to visit with the family. The observation that I made was not only that there were more churches, but they were all these behemoths nestled neatly in open fields of green, neatly-trimmed grass. Their crosses were equally monstrous and, when lit up at night, could be seen for miles in any direction.

I do like the thought of the world ending, though. It might put me out of the misery of having to deal with all of the uneducated gits in this world and those who keep the gits in fear. That is something of which I am truly sick.

Sorry to hear about Kokomo. I mean, I'm not sorry about how it's changed into a giant church with the occasional liquor store; I'm sorry you had to go back. I last went to Elkhart over the xmas 09 holiday, and the place was beat to hell. You could probably run a pretty profitable business selling those rubber gonads that hang off of trailer hitches, though.