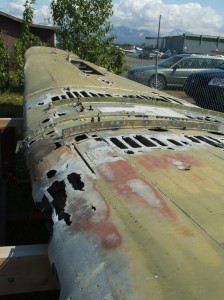 There are currently two things that every single show on cable must be based on at this moment: either making cupcakes, or Alaska.  I went to AK in 2006, and found it interesting, although now it’s a much harder sell to get people up there, given that a certain someone has branded the state as a vast wasteland of idiots.  It’s much more than that, but of course I’m going to start writing about it with a much more stupid filter, which is a visit to Denny’s.

This was probably the beginning of the end of Denny’s for me, I mean aside from the whole diet change. I used to love Denny’s, and I guess that started in Bloomington. There weren’t that many 24-hour places to eat, and you’d end up at Denny’s more than actually wanted to go there. At least it was that way at first, especially when I didn’t have a car and someone else had to drag me around. But then it transformed at some point, and I used to go there to write, or try to write, hours with the spiral notebooks and bottomless glasses of Coke.

This Alaskan Denny’s, it was on some half-deserted strip of highway in Anchorage, and it had this big construction fence down one side of the parking lot. The owner was trying to subdivide the land I guess, sell this narrow strip of leftover parking lot to some other business. Who would buy it? Maybe one of those espresso coffee shacks? Or maybe it was some kind of zoning bullshit tactic, like “give me this much extra money to keep this twelve feet of your parking lot. / No? Well fuck you, I’m going to sell it to your competitor and really screw things up for you.”

I remember service being poor, and some horrible Palin-esque family of fourteen at the next table, the dad in full camo with this redneck grizzly man beard, and a wife that looked like it was the only time that year she wasn’t being actively beaten. Alaska in June – I think we just landed on the cusp of the tourist season, like a week later and we would be inundated with bluehairs and grandchildren. The week we were there, we almost had the place to ourselves, except for the skeleton staff of locals, keeping the basics going.

I always used to get the All-American slam, which isn’t the healthiest thing in the planet: scrambled eggs with cheese, bacon, sausage, hash browns, and toast. I just looked it up: 970 calories, but a whopping 76 grams of fat. The food was off for some reason though. I mean, it wasn’t spoiled or anything, but the bacon tasted thin and reconstituted, like it was the strip of meat in a frozen TV dinner. I found some other minor oddities like this in food in Alaska; it seemed like they shipped up things that couldn’t grow up north, so they sometimes subbed things out with poor imitation rehydrated food.

But bacon – I mean, we went to this place, I keep thinking it’s City Lights but it’s not that (Northern Lights? Snow City?) and they had real bacon, the thick strips of solid, crunchy bacon, the kind you could pick up between your thumb and finger at one end  and it would stand straight out and not sag at all. And it had no visible fat. I’m sure it still contained like 40% fat, but it didn’t have the greasy, hard-to-chew strips of white at the edges.

But I had to go to Denny’s. We had a car, a little white Matrix, like the zipcars we rented for some insane rate back in the city. I never got to drive anymore, maybe once or twice a year, and Sarah would drive us out to some mall in New Jersey every once in a while, not that malls really did it for me anymore. I did like the occasional trip to a real Target, the pacifying effect of pushing a big red cart down wide aisles full of jumbo-sized boxes of everything, ten versions of every product, as opposed to the typical New York style of only one choice and that was practically a travel-sized portion, at twice the price of the giant 144-pack you’d get out in the country.

Sarah went to some thing – a facial, or a pedicure, and to kill time, I got the car for a couple of hours. I went to this aviation museum out by the airport. That airport is just this weird mystical strip of nothing in the middle of nowhere. You’re driving through moose country, and you suddenly stumble upon miles-long strips of asphalt, with huge stretch jumbo jets from across oceans floating down to land. Every flight to Anchorage is some huge cross-country thing, a 767 filled with tourists from LA or Tokyo or some other city that involves following the curve of the earth for two thousand miles.

And that museum – it was basically a dumping ground for any ruins of planes they found across the state. There’s a lot of civil aviation and small military aviation up north, and because of weather and maintenance nightmares, a lot of those little flights fall from the sky and are never seen again. And then decades later, some bear hunter finds the carcass of an old P-38 from World War II that went off the radar and got buried in a glacier. When they could chip those things out of the ice, they ended up at this museum.

They did have some nicely restored planes inside, old wooden biplanes and maybe a warbird or two. They also had a collection of surplus planes, obsolete military gear donated to the cause, obscure workhorse planes that came too late for the big one and too early to go to Vietnam, these weird fifties-era helicopters you’ve never heard of, because elsewhere they went extinct with the advent of the Huey, but some outback division of the forest service painted over the camo with bright yellow or orange and used it to drag oil well pieces or rescue dog sled operators lost in blizzards.

Beyond the military surplus was this third tier of the absolutely beaten and fucked pieces of crashed planes. I think they had a noble idea, taking in this potentially rare and impossible to find collector planes, things that maybe the Confederate Air Force and some rich Branson-type guy had the only two in existence, and here’s 26 percent of one that flew into a mountain in 1947 and was left to rust, except maybe it was encased in some bizarre combination of blue ice and no acid rain that left some of the galvanized or alloy pieces intact. But this organization had zero money, maybe a couple of senior volunteers that swept the floor and could put a coat of latex house paint on top of the ruined carcasses. They probably had a small population of retired Air Force guys who did know the proper way to fix up one of these planes, and maybe they were lucky enough to get a few hours of patriotic service out of them. But there were also enough working retired aircraft still making hops across the Alaska terrain that needed the TLC from a trained mechanic to keep the tourists in the air or to get raw supplies or medical aid to people up in Fairbanks or Nome or the upper pipeline.

I still had time after the tour, and went to a Burger King across the street from this used book store where we ended up almost every other night of the trip. I needed something to eat between meals – we ended up on such a screwed-up schedule because it never got dark, and we’d sometimes eat dinner at ten or eleven at night, when it was still broad daylight out. I ordered something tiny, like the junior King menu, a smaller burger and a small fries, and sat alone, picking at the food and browsing through the snaps I got on my digital camera. I saw this kid working the counter, a pencil-necked guy with glasses, but not the typical nerd, more like the Boy Scout nerd, the kind that was athletic in the sense that he ran cross-country, but he also tried to go for the eagle scout ranking and knew how to start a fire in the rain and could hike twenty miles in the hills and be okay. But not a ladies’ man, not a football player, not the kind of scraggly Alaska man that lived on Skoal and Jack Daniel’s and listened to Nickelback and Pantera and drove a pickup truck.

He was talking to some girl behind the counter, and told her that he just joined the Marines, that he signed the papers and was going to ship out at the end of the summer. This struck me on many different levels. One, the kid didn’t look like the Marine type. Maybe I could see him in the chair force, playing around with some weather computers or directing air traffic in an office with a coffeemaker running like the Daytona 500 and lots of yellowed post-it notes on every surface. He didn’t seem like the leatherneck type, too much of a loner or something. I knew that in eight weeks at Parris Island, that would all get beaten out of him. Maybe that was his goal, though, so more power to him.

But also, why the hell would you join the Marines in 2006? That’s pretty much a death sentence, or at least a guarantee that you’ll be sent out to fight in some shithole maybe eight weeks and two days after you sign your papers. But it also hit me that this was the only way out for a kid like this, that nobody could afford college anymore, and you didn’t get rich serving crap to old people on a cruise boat layover at a chain hotel. And if I grew up in Alaska, I would have done everything in my power to get the hell out the second I turned eighteen.  I know I felt that way in Indiana, that all-consuming need to put huge amounts of distance between me and everything and everyone.  But I could always load up the car, drive for 20 hours straight, and land in a completely different universe.  In Alaska, you can drive for two days and barely make it into Canada.

So yeah, Alaska – worth the visit.  Don’t go in the winter, though.  23 hours a day of darkness would really put the zap on things.