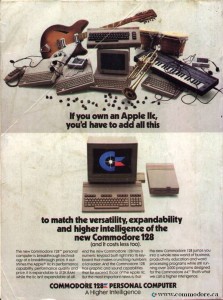 I watched a documentary a bit ago on the Baltimore Colts marching band, which I guess continued to exist after the Colts left town for Indianapolis in 1984. (It was part of ESPN’s “30 for 30” series. I find that even though I don’t like or understand all sports, I love pretty much any well-done documentary about sports, and all of these have been excellent.) The story itself was interesting, but what caught me was the 1984-ness of it, and the fact that I only peripherally remember football coming to Indiana. (I only remember it at all because my mom still bought my school clothes for me when I was in like the 8th grade, and she got me a Colts shirt, and this was the season when they went like 4-12, and dressing your kid in a Colts shirt and sending them to school was a virtual death sentence, probably two steps worse than dressing them in blackface and a Confederate uniform and dropping them off at an inner-city.) But some of the footage pulled my memories back to that time window for whatever reason, that era when I was in junior high and the EPCOT center was brand new and the future, and everyone thought “The Superbowl Shuffle” was cool as hell.

I guess I don’t think of the difference between network TV news now and then until I see old newsreel. I don’t know if it’s the timely look of the reporters – the hair, the clothes – or if it’s something about the production values. Like, when it was the late 80s/early 90s, I don’t remember thinking “this looks horrible”, but now when I go back to a TV show of that era and see everyone with the giant, giant glasses (like I had) and the sweaters over their shoulder and the generated graphics that look like they were done on a ColecoVision, I think “what the fuck were people thinking?”  I never turn on the TV news now and think “wow, this looks 100% different than it did last week”, but then I see a clip from 1995 and it looks like it could have been produced on 1947 equipment.

There are a couple of things I immediately think about from that period. One is the Fiero. I don’t know why, but I really wanted a Fiero when they came out in 1983. It was like the future of cars to me, and the way they marketed it, they made perfect sense: the slick design, the EnduraFlex body panels, the Italian-style mid-engine, only two seats. I didn’t care that you could only carry one bag of groceries in it, and I didn’t know anything about the engine fires or the fact that the whole drivetrain was cobbled together from the leftovers of a Chevette and a Citation, and performed accordingly. I just remember getting a glossy brochure when I saw one at the Concord Mall, and I memorized the thing, wishing that after the four years or so passed when I got my license, I’d somehow magically get the money to get such a cool and futuristic car.

The Fiero shared the philosophy of a sports-only car like the Corvette, the “fuck you, family man – it’s a two-seater”, and it had the styling of the Pontiac Trans Am, the Knight Rider car, but in a smaller cousin. And this was an era when people in Detroit were trying to put performance back in cars. Every coked-out Miami Vice wannabe person rich off of Reagan-era stock market rapings was going out and picking up a Ferrari. And the big three were coming off of a horrible decade where performance cars were all but killed by wimpy engines and EPA guidelines and DOT requirements. But Delorean was trying to win people over with his future (albeit underpowered) car; the Knight Rider third-gen F-body was on the road; and the high-end Vettes were getting into fuel injection and computer controls that would usher in a new era of performance. It was the start of a good time.

Another consumer mind bug that caught me back then was the Apple IIc. I had a love/hate relationship with the Apple; my schools always had them, and when I got a crack at them, they were always great, but they cost an insane amount of money, at least compared to the Commodore and Atari computers built up around the same 6502 CPU. But then Apple released this new machine, essentially a portable “all-in-one” version of the II line. And once again, I got a slick multi-page brochure booklet, maybe at the mall, maybe at Templin’s Music, which sold some computer stuff (although they mostly stocked Atari gear.) The brochure was part an implementation of Apple’s Snow White industrial design language in the form of a pamphlet, and part the genius marketing philosophy Apple was hacking out back then. And for whatever reason, I pored over this book, and tried to count out the number of lawns I’d need to mow to get one of these things to myself.

The genius of the IIc was that it heavily advertised itself as a “portable,” but it was, at best, a “luggable.” The computer did seal in everything that came with a IIe into a single eight-pound unit, maybe two or three times the size of a large laptop, but that didn’t include the power supply or monitor. Back then, they announced a small LCD screen that would sit on top of the computer, and had the same snow white design.  It didn’t solve the problem that you had to haul around a giant power brick and be within arm’s reach of 110 AC (or bring along a Honda generator).  Also, from everything I’ve heard, those LCD screens completely sucked.  But those shots of the IIc plus LCD looked absolutely mind-blowing to me, especially since I spent forever hauling around my Commodore and earlier Aquarius, jumper-cabling them onto my dad or grandma’s TV sets on the every-other weekend divorced child shuffle. In fact, the Commodore was infinitely more portable than the IIc, but the Apple looked like a cleaner solution. And it had a floppy disk built into its side, which was a first at the time.  (And yes, I know they made a luggable version of the C-64 with a built-in monitor and 1541 drive, but that was way out of my price range.  And a quick look at eBay shows that they still are.)

I never got a IIc.  I spent a lot of time on the IIe and IIgs at school, but never even saw a IIc during that timeframe.  Years later, when I worked at Wards, this girl Michelle had one, and once she talked me into coming over to tutor her on BASIC for some class she was taking at IUSB. Of course, they were using GW-BASIC, probably on the piece of shit Leading Edge computers I’d later have to maintain when I worked at IUSB, and she had the Apple IIc, which was just different enough BASIC-wise to throw off the whole damn thing. We sat in her bedroom, hacking away at it, and I don’t remember how I felt about the computer, although it wasn’t a slam dunk like the brochure made me think.  (And there’s part of me that thought this tutoring session was about more than just computer tutoring, but I was so stupid about the opposite sex back then, even if she chained me to a wall and started raping me, I’d still be like, “wait a second, we could use a GOSUB here and save five lines of code.”)

I never got a Fiero, either. When I lived in New York, I would occasionally see one on eBay and wonder if I should jump on it. The interiors look really dated now, the boxy gauge panel, the 85 MPH speedo. Most people bought these things either to become donors for some kind of kit car (Ferrari, Lambo, etc) or to drop a V-8 into and completely fuck up the balance of the thing. I still wonder about doing a full restoration on one, keeping the sleek exterior body but maybe transplanting in some 21st century powerplant and a real suspension system, plus a cool digital dash and some modern sound system bits.  And then I start thinking about buying a 1970 Z28 and a 2011 Camaro, and taking the body of the ’70 and putting it on the fuel-injected, 4-wheel ABS, all-modern electronics chassis of the 2011.  And then I remember that I drive about 40 miles a month now, and even vacuuming the floor mats of my current car is way beyond my patience level, let alone some extreme welding project involving $30,000 of shit I’d have to scrounge off the internet or at junk yards across the country.

And now I need to close the damn eBay window, and stop looking for a cheap SX-64, or even worse, a cheap PSOne monitor and C-64 innards in order to roll my own C-64 laptop.  It’s better for me to fire up x64 in an emulator window and get bored of it after ten minutes.  Or even better, I could shut off all of this and actually WRITE.