I went to LA this weekend.  It was a quick mission – we flew out Saturday afternoon, flew back Sunday night.  Just long enough to get a taste, and to get the cats pissed off that we abandoned them (although we had someone feed them; it’s entirely a psychological game to show us who’s boss.)

So we stayed in Santa Monica, which is probably one of my favorite parts of LA.  I know a lot of people hate LA, especially New York people that feel that paying far too much for the privilege of bedbugs and living in garbage somehow defines character.  New York has its points, and I’m glad I did my time there.  But I really do love LA, and just seeing the people and walking around in the sunshine and looking at that crazy mix of old neon signs faded by the barrage of UV rays mixed with the modern glass and steel architecture.

We were at a hotel right off of the beach, and yesterday morning, I got to take a nice walk and snap some pictures and see a bunch of stuff I recognized mostly from playing Grand Theft Auto.  It’s always weird to have that geographical reference in your head, where you know “hey, you can walk under this pier here, because sometimes I hide under there with a shotgun and kill hookers, and the cops take forever to get here.”

I took this picture of Hot Dog on a Stick, which for some reason showed up in the two posts previous to the trip, so there’s some weird synchronicity/conspiracy thing going on.  This is the original location, on Muscle Beach, and it’s missing the “on a” on its sign, but the cashier is wearing that weird rainbow uniform and fez hat.  I didn’t stop and get one, since I had just finished a giant breakfast at the hotel, but maybe I should have.  I try to limit my consumption of hot dogs to when I’m at baseball games, and corn dogs, from a nutrition point of view, are absolutely evil.  But sometimes, you have to.

HDoaS is primarily a west coast phenomenon, although there are some locations scattered across the country in malls.  I first remember seeing them in a Beavis and Butthead video, where some emo punk band was wearing the rainbow uniforms.  Years later, I remember seeing one at the Lloyd Center mall in Portland, which is one of those weird mid-century malls built in the early 60s when indoor malls were a new thing, and this was built to be the biggest mall in the country.  I think Simon owned it when I was going there (mid-90s) and I always liked it because I was really into shopping malls at the time and it reminded me of all of the Simon malls of the midwest.  (I never liked to shop, never bought clothes, and the record and book stores in malls have always sucked, so I’m not sure why I was so damn fascinated with malls at this period in my life, but I was.)

Later, when I lived in New York, I found it damn near impossible to find a good corn dog, frozen or fresh.  I think since then, it’s become easier, but I spent many an hour scouring the poor excuses for grocery stores in Queens, trying to find one that had any corn dogs in their freezer case.  And a frozen corn dog is always crap, because you microwave them and they split and the casing gets all moist and soggy, or you bake them, which takes forever, especially if you have a piece of shit oven that doesn’t work because you’re renting your apartment from the mafia and they don’t even keep the hot water on half the time, let alone service the appliances.  So when I was coming out to Vegas two or three times a year, I was happy as hell when a Hot Dog on a Stick opened at the Fashion Mall and I could go to their food court and eat them until I got sick and swear off cased meat products entirely, until my next visit of course. 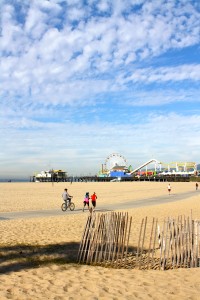 But LA, man I missed LA.  I went back two years ago for a trade show, but spent all of my time answering stupid questions under fluorescent lights, and didn’t get to wander around.  This time, we had a car, and drove all over the place, up PCH and around the twists of Sunset and through Bel Air and the giant gated communities and houses where billionaires still had lawn jockeys, and into the strip where we passed the Comedy Store and the Rainbow and the House of Blues and the Whisky and all of those places memorialized by big hair bands of the 80s.  And we drove through our old neighborhood in Playa Del Rey, and through the Bellona Wetlands, and past my old Ralph’s and my old Pavillions and my old Fatburger and my old gas station and all of this stuff that made me miss 2008 and the summer I lived there.

So now I am back to 52 and rainy, and wish I had two million dollars to buy a nice beach house and watch the joggers and eternally fit rollerblade past, and peck at writing all day.  But it’s Monday and time to work, and go find the 2011 baseball schedule and figure out when I can catch the Rockies down at Chavez Ravine, although they are something like 2 and 22 at Dodger Stadium in the last couple of seasons.  But their horrible road record against LA is outweighed by Dodger Dogs and Vin Scully and a chance to spend another weekend down there, so it’s on.