One of my new year’s resolutions is to get a reality show of mine picked up on the upcoming motorized combative sports channel that Viacom is trying to get off the ground in 2012.  I’ve been reading all of these bullshit Syd Field books, and trying to figure out this new Mac software package ScreenFuckerPro, which is supposed to have some wizard mode where you enter a noun, a color, and a verb and it spits out a perfectly formed 120-page screenplay.  Over half of the stuff on UPN or whatever it is called this week uses this program.  I think my copy is broken, because I downloaded a torrent and used a fake serial number, and now no matter what nouns and verbs I put into it, the result is always the pilot episode of Felicity.  I’ve spent the last 200 hours trying to figure out the key macros and wizard screens and pull-out side palettes, and I probably could have just written the damn treatment in notepad by now, except that involves work, and I still can’t figure out if I’m supposed to use notepad or wordpad on a Windows machine, and no matter which one I use, the thing ends up unwrapping and putting the entire damn thing on one line with \874 and \262 and Ä instead of quotes and dashes. 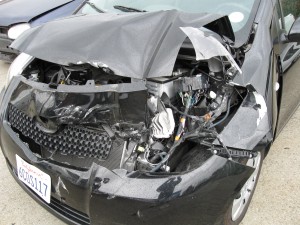 So I’ve been trying to wrap my head around some kind of “green” demolition derby – something that captures the essence of classic motorized combative sports and their ability to transfer the pent-up sexual frustration of middle America into twisted metal and bent-up mid-70s shitheap Buicks and Chryslers with some angle that will get idiots who buy Green everything to shell out money on pay-per-views.  And the answer is not just to have an all-Prius demolition derby, although if you’ve ever seen a Kammback body car get rear-ended when it’s nosed into a wall, it’s probably as tasty an instant replay as any self-defecation Taser scene from COPS. (And yes, I have tried to pitch an all-pants-shitting/all-Taser COPS spinoff or special, but getting John Langley to return my phone calls is like trying to book Kanye to play at a Klan rally.) The Green-buying public is too into the notion that their priceless hybrid will run for four million miles and won’t ever age or die young; they are not cool with seeing Japanese plastic and metal on jackstands in some hillbilly’s garage, getting the glass punched out, the frame pre-notched, and the precious Toyota high-gloss Driftwood Pearl covered with spraypaint flames.

Don’t get me wrong; an all-Prius demolition derby would sell.  There are enough people in red state America that hate hybrid cars and would love to see them get smashed to pieces in an orgy of ZEV destruction.  There are millions of people that would foreclose on their houses and sell their children to sex predators just to keep filling up their 2-MPG pickup trucks at four bucks a gallon.  In the flyover states, the hybrid is seen as The Enemy, much like homosexuals, the Macintosh computer, and “rap music” (which hasn’t been called “rap” music for something like twenty years, just like nobody calls “alternative” music “alternative”, but the second you ask some mouth-breather in Arkansas about MTV, which hasn’t played any music for at least fifteen years, they will always, without fail, tell you “well, I’m not really into that rap or alternative music.”)  Woodrow Wilson didn’t drive a hybrid, and nowadays, it’s all about looking back and glomming onto whatever dumb ideals got us stuck in two world wars and a great depression, because that’s how things are Done Right.  And of course, the best way to spread the word on how we shouldn’t embrace progress is to use a complicated modern computer network that was invented by communists, Jews, socialists, pederasts, sodomites, ivy-league academics, and Californians.

That, in a way, is an example of what I need to do.  The internet is a modern, progressive breeding ground of ideas and hope and communication and change, and yet every damn time I read an article about a wildfire or a tsunami, there’s at least a dozen redneck Patriots blaming the whole thing on Obama and socialism.  All computer networks that don’t involve two machines you personally own connected to each other with a loopback cable are intrinsically socialist; if you pay $39 a month for a DSL or cable connection, do you think that you and every one of the other millions of subscribers are using exactly $39 of bandwidth?  Either you are downloading torrents of every episode of The Dukes of Hazzard at a gig a clip and relying on the fact that your neighbor is an idiot who only downloads a quarter-meg of emails from his brother-in-law every month and leaves most of his bandwith unused, or you’re not using the entire potential of your connection and you’re essentially doing the same damn thing as someone who pays thousands of dollars into Medicare and never gets sick.  I would argue that the internet is the most successful form of socialism ever implemented.  What magic mojo gets the most radical fundamentalist conservatives to embrace an entirely socialist technology created by companies that pay their workers to give their gay atheist pets sex change operations?  That’s the nut I need to crack to be able to sell the destruction of hybrid cars to a population that largely fears cars and feels that any form of motor sports is a misogynistic affront on humanity in the same vein as hunting puppy mill-bred dogs with a sniper rifle and raping their corpses.

Fuck this is hard.  If someone would have bought my Who Wants to Be a Prophet show back in 2007, I’d have a foot in the door and a half-dozen spin-off shows where I’d show up to one meeting, change one adverb in the title, and get an Executive Producer credit fat enough to keep my beak wet in this sports steroid abuse memorabilia hobby.  (Do you know how much a game-used Barry Bonds HGH suppository goes for on eBay?)  Maybe the demolition derby will use all Priuses, but all the drivers will be hot lipstick lesbian types with lots of tattoos and rockabilly clothes.  I’ll get some BMX bike or street skate has-been to host, and maybe a British-accented supermodel wannabe to cohost.  Gotta go write this up – wish me luck.